» HOW WE HELP » UNITED FOR HUMAN RIGHTS

EDUCATING PEOPLE ACROSS THE GLOBE
ABOUT HUMAN RIGHTS

We are confronted daily with news of ethnic conflicts, inhumane practices, civil unrest and war.

The media is filled with stories of human rights violations—from domestic violence and school bullying to corruption and poverty and government-sanctioned discrimination. All the while, a majority of the world’s population does not even know what human rights are and that they are entitled to them.

Amnesty International reports human rights violations in some 160 countries—and not only developing countries. Some 18,000 individuals are trafficked into the United States each year, many of them forced into sexual and labor exploitation. An estimated 1.5 million primary school children are trafficked around the world annually. Another 171 million, most under age 15, work in hazardous conditions.

For more than 40 years Scientologists have championed the United Nations Universal Declaration of Human Rights (UDHR). In 1969, L. Ron Hubbard reprinted the UDHR in the Church’s Freedom Magazine and wrote:

“The United Nations came up with the answer. An absence of human rights stained the hands of governments and threatened their rules. Very few governments have implemented any part of the Universal Declaration of Human Rights. These governments have not grasped that their very survival depends utterly upon adopting such reforms and thus giving their peoples a cause, a civilization worth supporting, worth their patriotism.”

Inspired by Mr. Hubbard’s words that “Human rights must be made a fact, not an idealistic dream,” Scientologists support what has become the world’s largest nongovernmental human rights education initiative. In 1998, the Church launched the European Journey for Religious Freedom, an eight-country marathon that took the human rights message to millions. The annual marathon expanded to a 4000-km “multathlon” across Europe and subsequently in the United States.

The Church and its members now support the secular grass-roots educational programs of Youth for Human Rights International (YHRI) and United for Human Rights (UHR). YHRI, founded in 2001, teaches youth about human rights and inspires them to become advocates for tolerance and peace. Founded in 2008, on the 60th anniversary of the Universal Declaration, UHR unites individuals, organizations and governments in raising awareness of and respect for human rights at all levels of society. 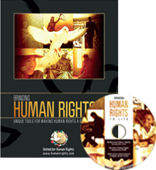